Our day started with a 4:30am car trip and steady rain which didn’t stop until the race was finished at 9pm.
We received our maps at 7:30 with only 1.5hrs to plan our course for the 12hr Rogue. After reading through the notes and looking at the maps, it was apparent to us that the course was not able to be cleared and the majority of points were in the final leg of the course. So we planned our course backwards with specific time cut-offs for each leg to maximise our chances of reaching the big points towards the end. 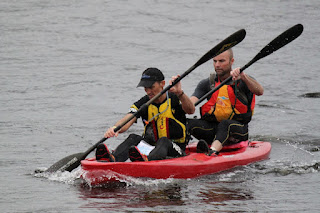 A short run to the kayaks saw us onto the water first and blazed a trail through the weed and tree’s. We had planned to drop CP5 on the kayak but we had 5 mins up our sleeve so we went for it and arrived at TA 7 10mins behind schedule. Onto the trek we sped around dropping C8 which to us looked like a sucker CP as it would burn up 50 mins for only 70 points reward. We got back to the kayaks back on schedule and just behind spin city cycles, but with an extra CP and 30points up on them. We let them stay in front as we had a sneaky portage planned across a saddle to access CP 16and cut off 1.5k, but unfortunately they saw us and change course when they figured out what we were up to. 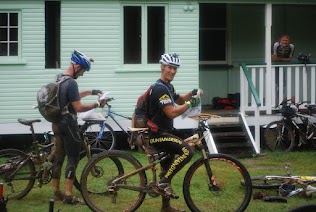 We finished the kayak 30min ahead of time in 1st place over Spin city cycles by 30 points. Off on the bike into the single tracks and we were having so much fun we decided to get CP 27, which was not part of our plan with the time we had saved during the kayak. The ride was fantastic, and even though it was wet the travel was generally good .I was obviously having a good day as it seemed nearly all downhill. We dropped CP’s 32, 33 & 37 on this leg as planned. Amazingly we went out onto trek at 5:41pm four minutes ahead of schedule, but soon ran into what we thought was going to be slow travel with steep drops into slippery creeks and a steep long climb up onto the ridge holding 230 points, but once on the ridge a unmapped track soon bought our pace back on track, we then took quite a few punts on tracks heading generally in the right direction that bought us back to the Transition area.  A quick slosh and slip up to CP 40, which unfortunately had been eaten by a starving motocross rider and then onto the finish, yes sometimes CP’s mysteriously go missing in events! 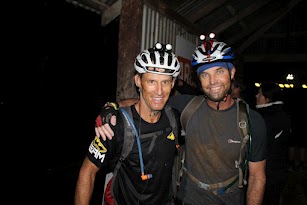 Hooray…… finally I get the socks and pants off which were a bit like wearing a jar of pins with all the grass seeds, why didn’t I wear my Moxie gators? A nice feed, couple of beers and a bottle of red shared with the Tri-Adventure girls, topped of a fantastic weekend of adventure.